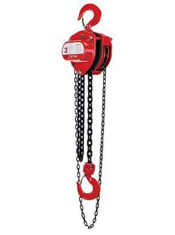 Manual chain hoists are installed in areas where it is necessary to handle a large amount of material with a large single mass, but very rarely (eg. during annual overhauls of equipment).

By installing manual chain hoists the floor space remains free for its original purpose, and wide transport routes are not needed as with using forklifts to move the material. 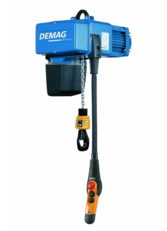 Demag rope winch has always been known as a component of high integration in devices for handling of material. They are used in all areas of industry throughout the world. They are distinguished by low own weight and compact dimensions.

Rope winches are available for a variety of loads, speeds and lifting heights. Their construction corresponds to the "Rules for the Construction of Serial Crane Equipment", published by the European manufacturers of serial crane equipment (FEM) and are classified into groups of mechanisms according to DIN 15020 or FEM.

Years of practical experience have been translated into the details of the mechanical and electrical construction. Serial production guarantees uniform quality. A large number of Demag patents in the field of rope winches sets new standards and has led other manufacturers to adopt newer, higher technical levels.

The rectangular contours of Demag rope winches allows easy installation. The possibility of routing the rope in any direction will satisfy each new application.

Demag rope winches are not only lifting devices - they are a key element in simple or complex solutions for material handling.

Electric rope winches with single girder or double girder trolley for horizontal movement of the winch on the crane, with their high technical characteristics, their safety and reliability in operation, and their minimal maintenance over long periods of use, represent the best quality to price ratio. All winches are equipped as standard with device against overload and hook range safety switches and frequency devices.

The new generation of chain hoists was developed based on years of experience of Demag engineers. The result is a perfect chain hoist with a very positive reception in the industry.

The concept of safety puts the DC chain hoist in the very top of the industry. An effective system of brake / clutch holds cargo in every situation. The winch does not allow the load to fall. Accurate and safe operation in any situation.

All under one cover

All important components, such as connectors, the device for height adjustment of the steering and suspension assembly for chain lubrication are easily accessible under the service cover.

Compact design DC drive chain can be completely replaced without the need for dismantling the motor or gear parts.

Ergonomic interface between man and winches

Demag ergonomics technology - a standard that the new chain DC winch fully meets. The ergonomic design of the hanging control with highly flexible 24V control cable sets new standards in the field of machinery. Controller type DSC sits comfortably in the hand, with or without a glove.

With the new DC winch, the potentially dangerous situations of elongating or shortening the control cable, came to an end. DC is the first chain winch equipped with a hanging controller which can be changed to desired length, any time, by as much as needed. This is an innovation in practice.

The service technician can read all the important operating parameters via a diagnostics interface (display or infrared) and spent hours, at a separate counter.

We deliver, install and service the remote control brand Telecrane for all types of cranes and concrete pumps for trucks.

FINING LTD. IS THE REPRESENTATIVE FOR RHYMEBUS - FREQUENCY INVERTERS ON ENGINES FOR WINCH AND GIRDERS.

Using voltage-inverters, speed induction motors can be precisely controlled, and by utilizing impulse encoders on the motor shaft, they can even be precisely positioned. Thus, one can easily make the synchronization, at the desired speed, or at a specific position, where needed. The control of the motor via the inverter can be described as follows: the starting and stopping times are programmed so that they do not allow sudden changes, which can cause dangerous swinging of loads. When stopping the engine, the speed is reduced to zero, and then the brake (ELDRO) is turned on, when the engine has already stopped. This considerably extends the life of the brake and it can be said that there is almost no wear. So this advantage is achieved, because the braking is achieved with the engine itself. The engine braking on the specified curve is made possible by the voltage-frequency inverter. The inverter monitors the motor in operation and protects it against overload, shock from the electric network, and is itself protected from the engine, for example, from a short circuit on the engine. The inverter display can be later read for errors, which are memorized, which makes it easier to find failures.

Slip-ring motors are expensive and almost discontinued. Speed control via a sliding disc resistor, it's almost non-existent, because the speed depends on the load, so that, for example. during operation of the winch at lower loads all the speeds (if there are multiple) are in fact the same, as the loads slide equally. The designers have used a variety of tricks to get somewhat of a regulation, such as connecting the stator to two phases, or driving the motor under the breaks with the lower voltage, or the addition of the eddy brakes and the like. Thus it is sometimes possible that in the first gear down, with a small load the winch in fact goes up.

By using frequency-voltage inverters to drive winches and translation we achieve precise control over engine speed, regardless of the direction of rotation of the motor or load (within the limits of the power inverter and motor). The engine speed is regulated both during the acceleration and during braking, and a it is possible to program both the slow start and the slow engine braking (the best is braking with the "S" curve). This function contributes to the reduction of load sway, and it also reduces the mechanical stress of the drive. Inverters have annexed chopper and resistor, which allows faster braking during operation of the bridge girder, and at lowering the burden on the winch takes the braking energy. In doing so, the inverter must be programmed to have a stop mode, the so-called "ramp to stop", or for example, the "s" curve braking turned on. The system is build at such dimensions to be able to drive the load up when working the winch, then stop and start up again. Also conversely it can lower the burden at the maximum speed down, stop at the programmed curve and again go up or down.

An additional advantage of the application of the inverter is that, in case of a failure of the slip-ring motor, a normal induction motor can be used instead, with the price of this motor up to 5 times lower in comparison to the slip-ring motor. It is worth noting that asynchronous motors are maintenance-free motors because they have no brushes (which must be checked regularly, and failure to check them and can cause engine flame outs). From the above it can be concluded that the congestion on cranes can be shortened, and availability increased. The need for regular controls of electrical equipment would thus reduce, because the offered solution has no wearing parts. In the long term there would be savings on maintenance costs, while increasing the security of cranes because ELDRO are no longer service brakes, but rather security brakes. This setup has a beneficial effect on the mechanical assemblies also, because it does not allow to for example reverse the drive and thus lead to the deterioration of construction cranes, gear units, motors and electrical equipment overloads.

To start the engine to drive translation, all the winches have voltage-frequency converters (with 150% overload for 60 seconds) mounted on.

The devices are equipped with so-called reactors (filters), choppers and resistors for dynamic braking. 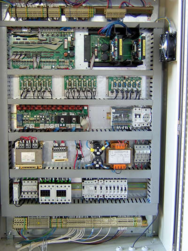 We design, produce, deliver, install and service electrical cabinets and electrical equipment for all types of cranes and other equipment from our offer. 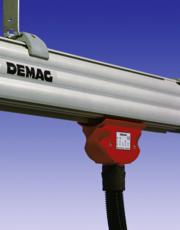 We deliver, install and service supply lines for cranes of all sizes and strengths.

Sliding trolley lines allow power supply to multiplz cranes on the same crane track irrespective of the length of the crane rail. 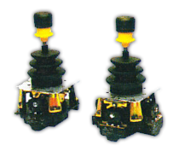 We deliver, install and service control rods for all types of cranes. 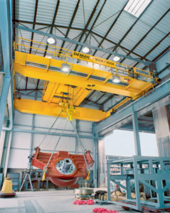 We design, produce, deliver, install, maintain and repair the crane rails and trails for all types of cranes.
0 0